Can You Take Benadryl When Pregnant? Risks, Side-Effects & Recommendations 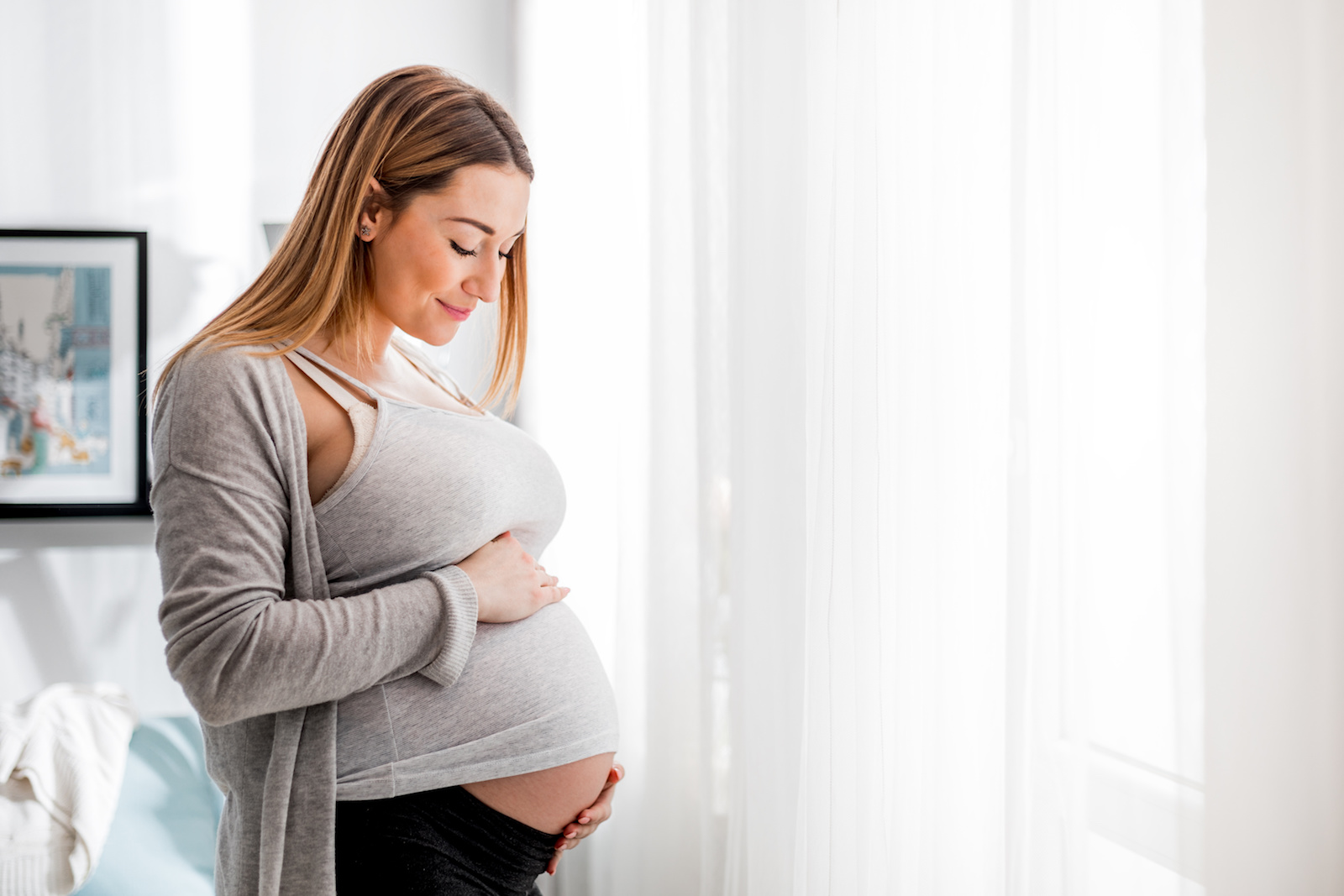 Benadryl is one of the most common antihistamine medications. It’s common to reach for a bottle of it even if you know it will make you sleepy, anything to make the irritation from minor or everyday allergies disappear. Medical care professionals in some emergencies might even recommend Benadryl!

But if you’re pregnant, it’s important to understand how anything and everything you put in your body will affect your baby.

Many common medications aren’t safe in pregnancy, but is Benadryl one of them?

Let’s take a closer look at Benadryl in pregnancy, whether it’s safe, and what the safest allergy medication is during pregnancy.

Can You Take Benadryl When Pregnant? Is It Safe?

Benadryl is an antihistamine that helps reduce the histamine response when your body is exposed to certain allergens, like pollen or pet hair.

Avoiding allergic reactions is important during pregnancy because a severe reaction can put added stress on you and the baby. However, it’s also possible to have more severe reactions to normal allergens in pregnancy or to develop an allergy you’ve never had before. In either case, having a good antihistamine on hand is important.

However, that doesn’t mean this medication is safe for all people during pregnancy. It depends a lot on your reaction to Benadryl and pregnancy itself.

Two of the most common side effects of Benadryl are dizziness and drowsiness. Most of the time, these side effects are no big deal, and the worst-case scenario is that you take an unplanned nap while taking the medication.

But the problem is that both dizziness and drowsiness can increase your risk of falling, which is a much more serious problem when pregnant.

Combine that added risk with the fact that pregnancy can increase your risk for dizziness and vertigo, especially in the first trimester, and for blood pressure and blood sugar problem (which can both cause dizziness) in the second and third trimesters, and adding Benadryl into the mix might not be a good idea.

That said, it may be perfectly safe to be mostly stationary and seated or lying down when taking Benadryl during pregnancy. It may be even safer if you don’t get drowsiness or dizziness from Benadryl.

Just remember that most people react a little differently to medications during pregnancy and that you may develop different reactions to medications at different stages of your pregnancy. So don’t take Benadryl if sitting down or lying down isn’t an option.

For most people, taking Benadryl occasionally won’t cause any problems. But it’s a good idea to have a plan for what to do if you get too dizzy or drowsy while taking this medication, including who you can call to come to take care of you while the medication does its thing. Should You Avoid Allergy Meds When Pregnant?

Skipping antihistamines entirely usually isn’t a good idea when you’re pregnant. There’s no reason to add additional discomfort to your pregnancy, especially since stress can make things harder for you and the baby.

That said, some medications are safer than others, even in medication classes that are considered entirely safe, like antihistamines.

Benadryl is safe, but taking a newer antihistamine may be even safer.

That’s because most newer antihistamines, like Zyrtec, are formulated to help manage antihistamine use’s side effects and unwanted symptoms. That means they’re less likely to cause drowsiness and pose less fall risk when you take them during pregnancy.

Both oral and nasal spray antihistamines are safe for pregnancy, and it’s also alright to experiment with a couple of different brands to see which one works best for you and causes the least side effects while pregnant.

Of course, if you’re ever worried about taking or trying a new medication while pregnant, you can call your doctor or your local pharmacist. They should be able to help you find safe and effective medications for treating your allergy symptoms (or any other symptoms for that matter) in a way that won’t harm your child.

Just don’t be surprised if there’s a bit of a process figuring out which medications are best for which situations. Everyone is different, and every pregnancy is different.

Are There Any Side-Effects Or Risks Associated With Taking Benadryl When Pregnant?

Benadryl still has all the same side effects as it would normally have when you’re pregnant.

Common side effects of Benadryl include:

There are a couple of more serious side effects from Benadryl, and you should seek medical attention. Those symptoms include:

These might not be the side effects you want to deal with during pregnancy. That can be a good enough reason not to take Benadryl if you choose not to. There are plenty of other antihistamine medications that you can try that will work just as well.

Other antihistamines might not have the same side effects, and you may not have as strong a reaction to those other medications. There are many options to choose from, and both oral and nasal spray medications can be used safely during pregnancy.

If you’re unsure whether a medication is safe during pregnancy, including antihistamine Benadryl alternatives, you can always call your doctor to ask or talk to a local pharmacist.

Remember, any medication that is more stressful than the symptoms you’re trying to avoid might not be the best option during pregnancy.

It’s also important to remember that your reactions aren’t always the same while you’re pregnant, so you might be unable to count on the same medications you used before. Pregnancy is a difficult and stressful time for anyone. Your body goes through many different processes to support creating a baby, and there’s a whole lot more to it than just supplying food, water, and oxygen to a small child.

Medications can also affect your body differently in pregnancy and may impact your growing baby. Some medications are safe before or after a certain part of your pregnancy, and some aren’t safe to take. You might need to avoid a specific combination that would normally be safe.

There are a lot of complicated interactions, and it’s pretty much impossible for you to learn about and keep track of all the medications you can or can’t take during pregnancy.

That’s a big part of why you must consult with your doctor anytime you’re considering taking a new medication, changing your dose, or even stopping medication during pregnancy.

Any changes to how your body works can impact your pregnancy, and it’s always better to be safe rather than sorry.

It’s a good idea to talk with your doctor early in pregnancy about what medications are safe for you to take as needed. That includes over-the-counter pain medications, antihistamines, and even which inhaler you should use if you have one. Any medication, including vitamins and supplements that you might take, should be cleared with your doctor, a pharmacist, or another qualified medical professional before you use it.

The other trick is to remember to ask about medications in concert with other medications. For example, taking long-term medication to help manage another health condition might affect which medications you can take during pregnancy. If your doctor doesn’t already know, or if you think they might not have your medical record in front of them when you ask, you should remind them of the other medications you’re already taking.

That includes any drugs you might be taking or addictions you’re dealing with. Your doctor’s job isn’t to judge you, and it’s to help support you and help you make the best possible medical decisions in your position.

Of course, Benadryl and similar medications aren’t typically considered addictive, but it’s important to remember that addictions can happen during pregnancy, and you can also be treated for those addictions. Dealing with addiction and pregnancy can be tricky, and medical supervision is often necessary.

If you’re pregnant and dealing with addiction or ready to overcome addiction so you can get pregnant, Ocean Recovery can help. Contact us to learn more about our treatment programs, your options, and the support we have available to help pregnant people and their families manage and overcome addiction.

Orthorexia: An Unhealthy Quest for Purity