Cocaine Comedown: The Rebound Effect of Taking Drugs & How to Detox Safely Please read on to find out what you can do to help yourself or a loved one during this challenging time.

What Is a Cocaine Comedown & What Are Its Side Effects?

A comedown is a time when the high of drugs slowly wears off. This is generally after an extended period of intoxication or frequent drug use. It is described as a “comedown” or “coming down” because you are falling from the high that the drug gets you.

This feeling can differ depending on the person, the number of drugs taken, how long the drugs have been taken, and the drug itself. Generally, if a person experiences intense intoxication from a drug to the point where they feel uncomfortable, anxious, paranoid, depressed, or delusional, the comedown can feel like a blessing. Getting rid of the symptoms of the high and replacing them with the symptoms of normality can be a good thing for some people.

For other people, the comedown from a drug can feel disappointing. This feeling of being let down sometimes draws people to the drug again. This is because the normalcy of life after the comedown cannot compare to the high and exciting nature of the drug. It causes a person to seek out the exciting high again and again, thus causing an addictive pattern generally present in addictive substances.

Some concerns about the comedown from drugs, especially cocaine, is feeling ill. If a person is feeling ill during the comedown, they may be experiencing a physical reaction or a medical complication to the drug. It is important to monitor these feelings of illness because if they persist over a long time, the user should seek professional help. Feeling ill during a comedown is not uncommon, especially in people who have been taking a drug for a long time in high amounts. However, if these feelings of illness during a comedown persist over time, the user should seek a doctor’s or mental health care.

It is important to seek professional care because many people can experience suicidal thoughts or actions during a comedown. Many people often experience wanting to hurt other people as well. Some folks report borderline psychotic symptoms, including hallucinations, delusions, hearing voices, and extreme paranoia.

Once you stop taking a drug that your body has become dependent on, you will feel psychological and physical effects. This is called withdrawal. This comes after and during the comedown time.

Withdrawal is a physical, psychological, and emotional experience following a user stops taking drugs. There are a variety of symptoms that go along with withdrawal, but there are common ones we can discuss.

These are the most common cocaine withdrawal symptoms:

Fatigue is an incredibly common symptom and occurs in almost every case of withdrawal from cocaine. The fatigue occurs because the body is getting rid of the toxin, cocaine. The body has to work incredibly hard to ensure that it is cleaning it out, all while running your body’s normal functions the best it can.

This puts an extreme toll on your body and can cause fatigue. Fatigue can also be caused by sleeplessness, another common side effect of withdrawal. Sleeplessness can occur because the person is detoxing. It can also occur because a person suffering from withdrawal can become very anxious, derailing their sleep schedule and causing exhaustion and sleeplessness.

Craving the drug is very common, and almost every person dealing with withdrawal from any drug will feel Cravings to take the drug again. Irritability and paranoia are two of the psychological symptoms of withdrawal. Irritability often comes from the lack of sleep, fatigue, and the inability to get the drug that the body now relies on. Paranoia can occur simply because the body is exhausted and running itself ragged to function without the drug it has become accustomed to.

Cocaine withdrawal tends to set in quite quickly, even before a person comes off their high. Many people can experience withdrawal while the cocaine is still in their bloodstream.

Cocaine comedown timelines often look something like this. The comedown will occur 24 hours after a cocaine binge and will include the comedown symptoms listed earlier. After that, the withdrawal will occur approximately a week after your last use of cocaine. The withdrawal can last up to 10 weeks.

Dealing with an intense psychological and physical addiction to a substance is very difficult to handle alone. This is especially true when quitting the substance and dealing with the repercussions of withdrawal and detox. During the comedown, a person needs to be able to rely on others to support them through it.

Although cocaine comedowns typically do not have visible symptoms in a person’s physical appearance, it is still incredibly difficult to handle alone. Just because a person is not shaking and vomiting like heroin or alcohol withdrawal, they are still dealing with intense symptoms internally and mentally.

Because these symptoms can be incredibly challenging mentally, having a support group with you is important. Although it may feel daunting or impossible, reaching out to your close friends and family and explaining that you have a cocaine addiction that you are trying to break can lead to you gaining a great support circle.

Telling people that you need help getting clean is the first step. They will help you stick to getting clean and will help you through all of the symptoms of withdrawal, detox, and the comedown. Make sure you communicate with people you trust who will not let you relapse. 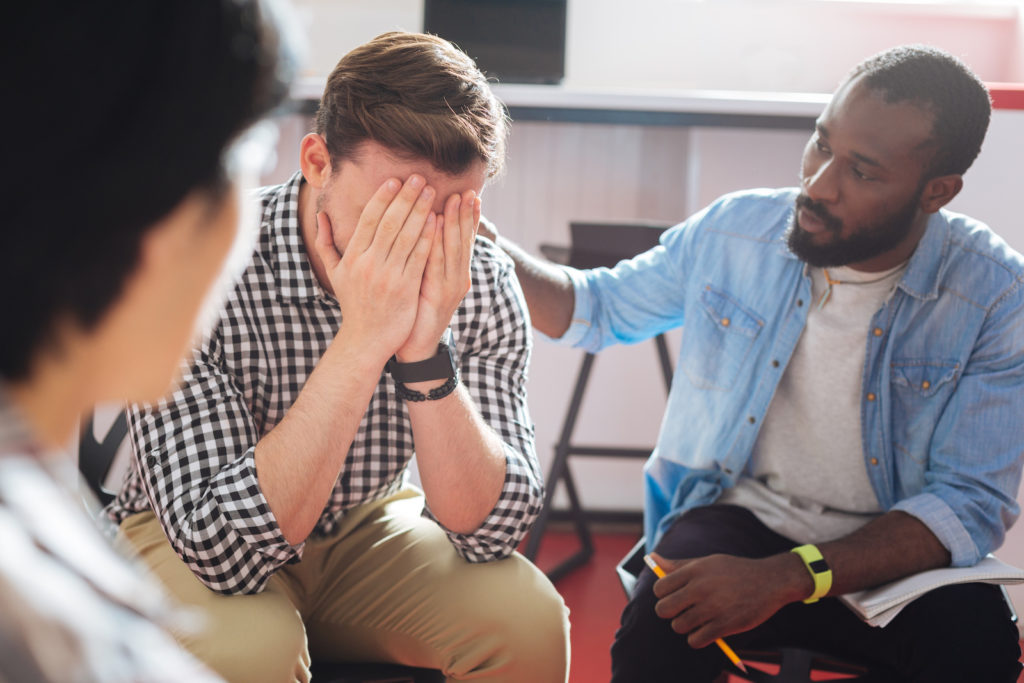 These people will understand that you are dealing with something challenging and will offer their support. Moral support is one of the biggest factors in achieving a drug-free life. Many people who try to get drug-free by themselves return to drugs. On the other hand, many people who rely on a support group of friends and family stay clean.

Another aspect of dealing with comedown or withdrawal symptoms is to stay hydrated. Although cocaine comedowns generally do not have physical symptoms like vomiting, you should still drink plenty of water.

Water is one of the best ways we can clean our bodies. It helps flush out toxins and eliminate unneeded solvents in the body. This includes toxins like drugs. The more water we drink, the more we flush out of our system. This is not to say that you should be drinking gallons of water while detoxing. That can lead to water poisoning. It is to say that you should make sure you are staying hydrated.

Staying hydrated and drinking the recommended cups of water for your height and body weight per day is a great way to keep your mood up, improve your mental state, improve your body’s functions, improve sleep, improve fatigue symptoms, and flush out unwanted substances.

Lastly, relying on professional help can be the difference between getting clean and relaxing. Many people think that there is shame in going to a professional detox center or rehab, but the truth is that those centers are there to help people.

If you check in or join a group that is ready to support you through this, you know that you are going to be getting professional guidance and care during this time. There is never shame in asking for help when you need it.

If you or a loved one suffers from cocaine addiction, please contact our premier detox facility today. We understand what you are going through and want to help guide you on your journey to a drug-free life. We hope that you join us in supporting you in your new life.